Taking a left once you're up the stairs will put you in Andrew's Room. You'll find General Science, Physics, Engineering, Chemistry, Meteorology, Geology, and Astronomy in a small alcove on your right.

Computers and Mathematics fill out the left side of this alcove

Around the corner, past Reference, are Linguistics and Books in Non-English Languages, including sections of French, German, and Spanish (by genre), and a section of additional languages, sorted alphabetically by language, then grouped topically.

Opposite Languages & Linguistics, you'll find shelves for Birds and Gardening by the south-facing window.

On your left from the entrance by the stairs are Biology, Nature & Ecology, Natural Disasters, and Nature Guides. Next are Agriculture and Anthropology, on the east wall.

Right of the door to the Radulpharium, you'll find another alcove, containing:

(north wall) Sports (with sections including Bicycling, Martial Arts, and Mountaineering), then Medicine, following a shelf devoted to Herbs and Yoga

Why is it called Andrew's Room? 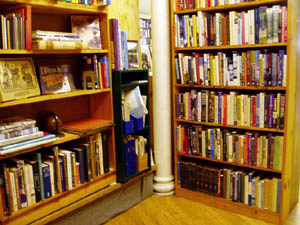 During Nialle's first years in the shop, one regular, Andrew Lauber, visited almost daily. He loved languages, especially Latin, and spoke several modern tongues fluently. His perspective was informed by the newspapers of half the world, friendships with people of many nationalities, and his own background in what was then Yugoslavia and in twixt-war Germany, as well as by his indefatigably scientific mind (he was a neurologist) and his love of the arts.

He brought with him information and opinions that opened a window on the world for us. He passed away a few years ago, and we miss him still.